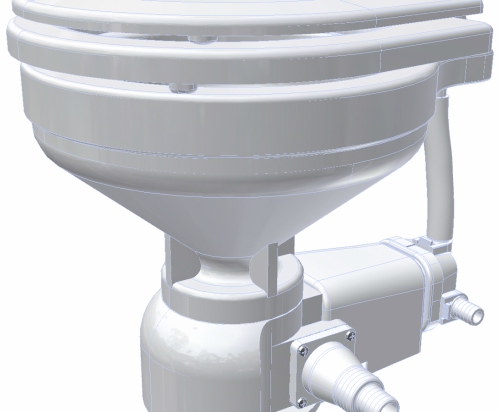 The SeaEra “original” is a toilet that has an integral intake pump at the back of the motor. This means a single motor is always running both the intake and the discharge at the same time. For those wanting freshwater or a remote intake pump see the SeaEra QC.

Design features of the SeaEra that make it unique from similar looking products include a full size joker valve to reduce clogs. Raritan also found it necessary to separate the intake water from the discharge water. In many other brands the intake and the discharge water is only separated by a seal. This means that dirty water can come in through the bowl. By utilizing a diaphragm intake pump and the opposite end of the motor the user can feel confident that they will always be flushing with clean water.

The only consideration is the type of control. With the SeaEra only a pushbutton can be used because it is a single motor driving both the intake and the discharge at the same time. For independent control options please look at the SeaEra QC as it offers multiple control possibilities.  Don’t forget for tight spaces or if trying to replace a manual toilet that the SeaEra allows for the base to be rotated to make it fit better in unusual and tight spaces.

The SeaEra was designed to fit in small spaces and allows users to rotate the base in 90 degree increments when the floor space is oddly shaped or was designed for a manual toilet with a pump and long base. The “original” SeaEra has an integral intake pump so all connections are at the toilet. The SeaEra with integral pump has some design features that separate it from the competition. Our design separates the intake water from the discharge water by the full length of the motor. This ensures no possibility of cross contamination. Similar competitive units have the intake and discharge only separated by a seal which means a seal failure allows waste water back into the bowl. Another feature is the full size joker valve which provides better performance and substantially reduces the probability of clogs. This original design is only available in the SeaEra which Is the macerating base with an integral intake pump. The SeaEra QC offers the option of a remote intake pump or pressurized fresh water solenoid.

The advantage of the original SeaEra is the integral feature of the intake pump. The only downside is that the controls on the SeaEra are a simple pushbutton or rocker switch. Because there is a single motor controlling the toilet this also means that there is no way to control the intake and discharge separately. If individual control of intake and discharge is important then the SeaEra QC would be the correct toilet for the job. The integral pump is a diaphragm pump which means it can be run dry. Years ago impeller pumps were the norm and had a habit of failing when no water was coming in. The advantage of a pump designed with a diaphragm is that they can be run dry without damaging the pump.  It must be noted that the diaphragm pump does make more noise than a freshwater model so care should be taken when planning on the location of the toilet.

The SeaEra while being a compact toilet does offer two bowl sizes. The marine size bowl is a typical small round bowl and includes a slow close lid. It is also offered in a household style bowl for those wishing to have a larger place to sit. In addition to the slow close lids the seat portion has a stop on it to help prevent it from sliding from side to side when in heavy seas.

Having been a part of the Raritan line for over 15 years the biggest complaint about the SeaEra is the lack of spare parts that our dealers and distributors sell for these toilets. The original goal of the design was to create an economical toilet that could fit in a small space and have the ability to be rotated so that it could be versatile. The complaints about similar units were that dirty water would sometimes enter the bowl and that is why the design is slightly longer than competitive units but we found it critical to move the intake pump away from the discharge area since nobody wants to flush dirty water through a clean toilet bowl rim. A full size joker valve was also a critical component to the design so that clogs would be virtually eliminated. 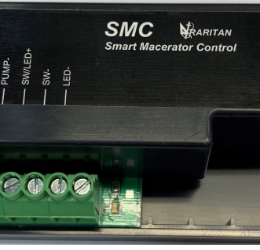 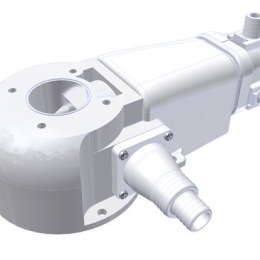 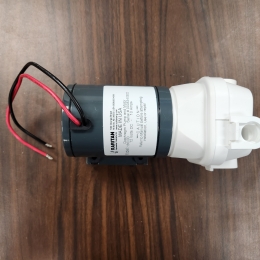